is a peer-reviewed journal dedicated to the publication of quality research results in the fields of Language, Culture and Linguistics but not implicitly limited. Jurnal Ilmiah Langue and Parole publishes regularly twice a year in June and December. Journal published by the Faculty of Literature university Ekasakti. All publications in journals JILP are open, allowing articles to be freely available online without subscription.
All articles published will have a unique Digital Object Identifier (DOI) number. The Langue and Parole Scientific Journal provides direct open access to its content with the principle that making research freely available to the public, supporting greater global exchange of knowledge. Jurnal Ilmiah Langue and Parole is an open access peer review peer review journal that publishes genuine articles or reviews. This journal focuses on Language, Literature and Linguistics. 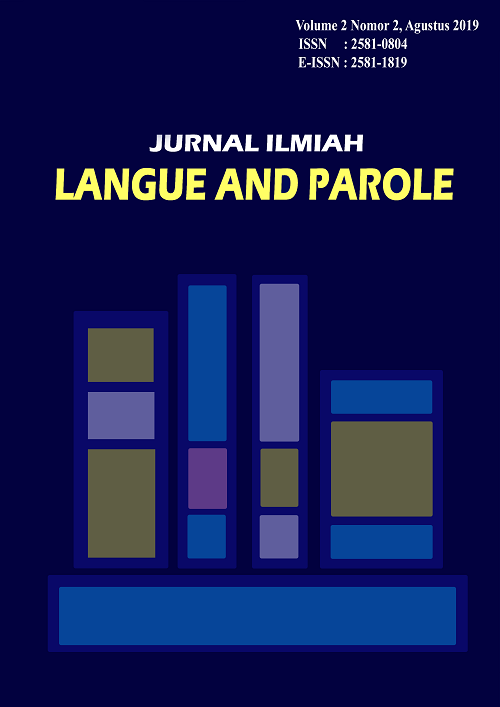 Download data is not yet available.
Vol 2 No 2 (2019): Jurnal Ilmiah Langue and Parole

The problem in this paper is psychological conflict between men and women. In the Trifles drama by Susan Glaspell, women seem to have no freedom in terms of expressing opinions, ideas and ideas only because of male domination. Plus women feel inferior just because the man is superior. This is manifested in the act of having to obey what men say to women both in the family environment and in the community.

In this writing, the writer uses descriptive research as the method of collecting the data. As for the data analysis method, after determining the theory obtained from the related book, the formulation of the problem is analyzed using the theory of psychology. By using the theory of Sigmund Freud, the characters in the drama are then further analyzed to understand the shape, causes and consequences of a conflict. Authors carry out structural methods with understanding drama, male and female characters. Data collection techniques use qualitative techniques by taking notes in collecting primary data. In data analysis techniques, the author uses techniques by interpreting data.

The results of the research in this survey are: 1) Forms of conflict obtained from female leaders whose actions are limited by men. 2) The causes of conflict comes from movements of female figures who do not want to be underestimated by male figures. 3) As a result of the conflict, Mrs. Wright killed her husband because he could not stand the treatment of her husband anymore. In closing, this drama tells the story of conflict between men and women. The mutual respect is very important between men and women.